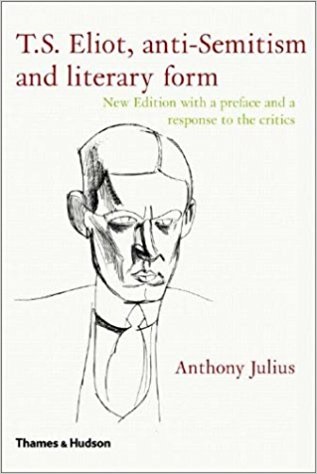 Anthony Julius, T. S. Eliot, Anti-Semitism, and Literary Form. Cambridge & New York: Cambridge University Press, 1995; New Edition with a preface and a response to the critics. New York: Thames and Hudson Ltd., 2003 – books.google
In The Guardian van 7 juni 2003 verscheen toen deze heruitgave uitkwam, dit stuk van Anthony Julius: “The poetry of prejudice" [cf.]. Ik neem aan dat het aan z’n nieuwe voorwoord met antwoord aan zijn critici is ontleend. Daarin schetst hij nog eens zijn overtuiging “that the question of Eliot's anti-semitism mattered. [..]  Most critical studies neglected this aspect of the work.” De antisemitische dichtwerken vormen een minderheid in Eliot’s werk, het gaat om: « "Burbank," "Gerontion," "Sweeney Among the Nightingales," "A Cooking Egg," and the posthumously published "Dirge". » Julius schetst als zijn aanpak: “We ought not to seek to outlaw Eliot's poems, but neither can we submit to them. We should not ban them; but we must not abandon ourselves to them. Instead we must contest that poetry, with strategies that acknowledge both its value and its menace.”
Hij heeft het over “Eliot's contempt for Jews” en ik ben benieuwd hoe dit t.a.v. Spinoza uitpakt.


In Eliot's early work, Spinoza, one such free-thinking Jew, is ‘unquestionably a hero, a symbolic hero of modern Europe'.29 He represents pure intellect, his philosophy the product of a mind untouched by the demon 'emotion': 'Certain works of philosophy can be called works of art: much of Aristotle and Plato, Spinoza... clear and beautifully formed thought.'30 Of that clichéd pair ‘the head and the heart' Eliot's examples are reading Spinoza and falling in love,31 yet he defends Spinoza against the charge of frigidity made by 'emotional people — such as stockbrokers, politicians, men of science — and a few people who pride themselves on being unemotional'.32 It was Spinoza's ostensible freedom from human attachment, and the geometric harmonies of his thought, that appealed to the Eliot of The Sacred Wood. He also invoked Spinoza's `amor intellectualis Dei' in support of the Kantian aesthetic adumbrated in that book.33 But Eliot later regarded Spinoza differently. He was susceptible to the romantic notion that Spinoza, whose work offers a refuge from despised ‘emotion', paid a high personal price for his detachment. Spinoza's inability to share the convictions of either the Jewish society into which he was born, or the Christian society into which he was exiled, looms large in Eliot's sense of the philosopher. This double alienation is the romance of Spinoza's life: ‘I am not altogether sure that Spinoza's isolation was not rather a misfortune to be pitied, than a quality to be admired."’34


It is by the development of this theme of isolation that the link between Eliot's praise of Spinoza and his contemptuous dismissal of the generality of free-thinking Jews is disclosed. In his introduction to the Catholic Josef Pieper's Leisure the Basis of Culture (1952), Eliot characterises Spinoza's work as a ‘one-man philosophy', one which is merely ‘a projection of the personality of its author, a disguised imposition of his own temperament with all its emotional bias, upon the reader'. Pieper's mind, by contrast, 'is submissive to ... the great, the main tradition of European thought' and ‘his originality is subdued and unostentatious'. Pieper ‘accepts explicitly a dogmatic theology' and ‘his presuppositions are in full view, instead of being, as with some philosophers who profess complete detachment, concealed from both author and reader'.35 Spinoza, thus, is doubly at fault where once he was exemplary; his detachment is suspect, and his work is corrupted by an emotional bias. The work is individualistic and dissenting. Its originality is overt and ostentatious, and it hides the premisses from which it is derived.


Blinded by Spinoza's ethnic origin, Eliot failed to discern the philosopher's place in Western philosophy. Spinoza's work cannot be excluded from ‘the great, the main tradition of European thought' merely because he was indifferent to Christianity. Eliot mistakes personal detachment for cultural rootlessness; Spinoza was an European philosopher, even though a Jew by origin and a non-Christian by choice. A secular Jew, Spinoza's contribution is within the European intellectual tradition; this is largely, but neither by origin nor wholly, a Christian tradition. He did not, in Santayana's ugly phrase, `live ... in the crevices of the Christian edifice'.36 On the contrary. His philosophical relation to the work of Descartes, and his wider intellectual debts, make him a thinker in communion with ‘the mind of Europe'.37 Why does Eliot deny the patent, as in his statement that Spinoza's work conceals its presuppositions, or in his statement that Spinoza stands outside the principal intellectual tradition of Europe?


Eliot imagines ‘the Christian intellectual tradition' (let me assume so readily isolable a thing exists) to be the only tradition available to Spinoza, and thus overlooks the Jewish aspect of his thinking. Spinoza remained philosophically indebted to Jewish sources even following his excommunication; intellectual influence cannot so easily be shrugged off as can synagogue membership.38 (Eliot dismissed Jewish philosophy as 'theological hocus-pocus '.39) Even if, which one would deny, Spinoza stood outside 'the main, the great etc.', this does not mean that there was no other tradition for his work. The choice need not be either 'the main, the great etc.', or a 'projection' of one's own personality. There are other traditions that, furthermore, do not run in parallel lines to each other, but criss-cross repeatedly so that in the end one sees not a collection of separate lines but a pattern to which they all contribute. Indeed, as Judith Shklar has noted, Europe has always had a tradition of traditions.40 Eliot remained unable to concede this throughout his life. As late as in Notes he was still insisting upon the determinative importance of Christianity; in E. M. Forster's summary of its main theme, 'Where there is not Christianity there is nothing’41— or only 'strange gods'.


After Strange Gods has a certain notoriety. It is known as the book that was offensive about Jews, the one that Eliot would not allow to be republished. The book is studied not so much for what it says about its subject but for what it discloses about its author. It is regarded as a resource for the biographer, not a text for the critic. Etc….[tot zover- Spinoza komt niet meer aan bod[