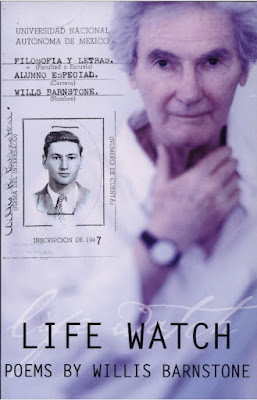 Volgens en.wikipedia is Willis Barnstone (born November 13, 1927) an American poet, memoirist, translator, Hispanist, and comparatist. He has translated the Ancient Greek poets and the complete fragments of the pre-Socratic philosopher Heraclitus (Ἡράκλειτος). He is also a New Testament and Gnostic scholar.” In zijn
Willis Barnstone, Life Watch: Poems. BOA Editions, Ltd., 2003 werd zijn gedicht “Spinoza in the Dutch ghetto” opgenomen
De flap van Life Watch: “A Circle of Ninety-One Nights is an ambitious sequence of -poems that begins in childhood, moves through Barnstone's adult years, and returns to youth. The poems engage and reflect on the civil wars that the author found himself in the midst of, Mexican orphanages, the cafes and arts salons in Paris, and walking with Borges. As the circles of these poems widen, they gather many perspectives on a life watched.
Willis Barnstone has taught at universities in Greece and Argentina and authored more than 40 books—poetry collections, poetry translations, philosophical and religious texts. The New Covenant, his literary translation of the New Testament, was published in 2001 (Riverhead Books).”
Uiteraard ga ik dat gedicht hieronder opnemen. Maar de informatie onder NOTES & ACKNOWLEDGMENTS lijkt enigszins afbreuk te doen aan de kwaliteit van het gedicht.


"Spinoza in the Dutch ghetto." Baruch or Benedict Spinoza (1632-1677), the Dutch pantheistic philosopher, lived quietly in the ghetto during his short life, dying from tuberculosis probably aggravated by his inhaling glass dust from his scientific lens grinding. Despite radical ideas of God that earned him excommunication by fellow Jews in 1856, he felt free and safe in the Dutch ghetto and selected not to take a professorship in Heidelberg. Shortly before he died he began a critically enlightened translation of the Hebrew Bible. Though close to mathematical Descartes whom he translated, he does not split mind and body which for him are distinct qualities of a single substance he calls God or nature. God is nature in its fullness, suggesting, perhaps by coincidence, the gnostic pleroma (fullness) that represents the gnostic deity. Spinoza's friend Baron Gottfried Wilhelm von Leibniz (1646-1716) was a rationalist philosopher and mathematician. Three years before Newton, he also invented infinitesimal calculus (1684). As a logician and metaphysical thinker he shared with Spinoza the notion of the universe divided into rational monads. For Leibniz each monad is a distinct immaterial universe with self-conscious-ness, arranged in an infinitely ascending order. His optimism led him to a satiric role in Voltaire's Candide. [p. 138]
Er zitten teveel foutieve en onzinnige dingen in om er hier op in te gaan 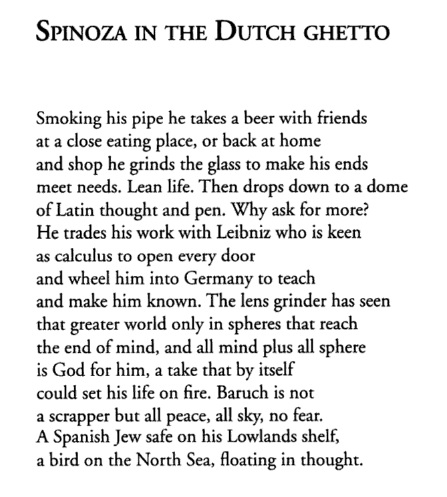